Another lovely day with the tide dictating a civilised departure at 08:00. The slip was not totally uncomplicated as a strong wind was “blowing us on” to the pontoon. Richard, as helm, employed the same manoeuvre as PeteR in Weymouth: drive forward onto the bow spring, back bit comes out, reverse with plenty of left-hand side, bring pointy bit round, drive away which did happen – eventually – and with much enthusiastic use of the bow-thruster. This was viewed with mild disapprobation from certain male members of the crew (carefully chosen words) who opined that, given sufficient skill, it should not be necessary to deploy the B-T. Richard’s characteristically mild riposte was on the lines of “What the fork is it there for then?”.

After this interchange, Richard was not relinquishing the helm any time soon and, having cleared the harbour entrance, invited the crew to “hoist the mains’l’ and, after a short interval, “hoist the heads’l”. Both exhortations were followed by the obligatory “pleese” which, given the foregoing, might have lacked complete sincerity.

We then started on a brilliant sail with lots of tacking to avoid rocks, shallows, ferries etc. In the meantime, Sue, who hadn’t banged on at all about the B-T, was preparing the dinner. Measuring and mixing several spices while standing at an angle of 45º takes some doing and, to her great credit, done it was. After a couple of hours, we cleared Pointe Corbiere and turned NW for Guernsey sailing on a close reach with a fresh force 5 and a lively sea which was both exhilarating and tiring. A message then came though on the VHF (always tuned to the Coastguard channel 16) concerning a strong wind warning “Strong wind for the Channel Islands, force 6, WNW or NW imminent”. And were they right! Another reef was put in the mainsail which placated Jackie who had been grumbling about it since St Helier.

We were continuing under slightly more control when another message came through on the radio: “Pan Pan, Pan Pan, PAN PAN!” This is Comrec, Comrec, COMREC!!” (A Pan Pan call is one down from Mayday) The terror in this lady’s voice was unmistakeable and the memory of it still causes a shiver. The coastguard answered immediately and gradually elicited that she was on a small yacht 10 miles south of Pointe Corbiere with one other person on board and the boat was taking on water. The St Helier lifeboat was alerted and offers of assistance came through from several other vessels. We believe this tense and harrowing story had a relatively happy ending: the fishing boat Time and Tide reached the yacht after 40 minutes and tied on thus preventing her from sinking. The St Helier lifeboat arrived soon after and took over the rescue.

The wind increased still further so the foresail was reduced but we were still making 7 knots through the water which in yachtie terms is pretty quick. So rapid was our progress, we reached St Peter Port about two hours early. PeteR guided us onto the waiting pontoon with total assurance and no B-T but tactfully refrained from practising his one handed bowlines.

Boat cleaning and cups of tea preceded moving on to our berth in the marina proper once the tide had risen sufficiently. Then came dinner! Sue produced a sensational lamb rogan josh for which she receives a justly deserved PM. 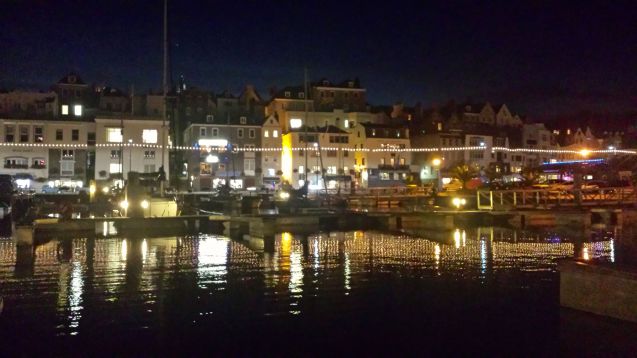 A very long walk to Guernsey Yacht Club was rewarded by a pint of Doom, excellent wi-fi and oblivion.