The day started with rather good egg and bacon banjos* prepared by No 1. These were followed by a very interesting talk on “Man Overboard’ by Phil focusing on performing the procedure under sail. We then set off to catch the famous Alderney Race which is a tidal stream running NE/SW at up to 7 knots. Ethel Wind was in residence so we motored most of the way.

We were having a really good sail at up to 9 knots along the southern coast of Jersey when we spotted a Condor Ferry leaving St Helier. These vessels go at up to 35 knots so it had our complete attention when we realised we were on a collision course. We did all the proper stuff by making a distinct move to starboard. Now only ½ mile away, he then altered course to port in order to maintain the collision course. By now, RBE was feeling collectively nervous so we quickly tacked to port and it was this manoeuvre, we surmise, which alerted the ferry to our presence. We suspect that no-one was actually on watch and their anti-collision software saved the day. So, a big MF to the skipper and crew of the ferry which left St Helier at about 15:30 on 22/09/14.

Our original plan was to moor on the visitors’ pontoon outside the marina. This was thwarted by the said pontoon being closed for maintenance. We were then invited to moor up “anywhere on pontoons E, F or G”. We selected a nice gap on F and then realised that the dock had no cleats which we could lasso from the boat. The day was saved by PeteR traversing from the boat to the dock (leaping would be too strong a term) and then running around like a dervish threading our lines into the metal loops provided. 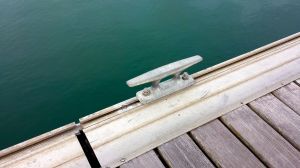 Facilities were enjoyed (oh yes they were) before a sumptuous dinner of chicken pie with vegetables followed by jam tart. All the aforesaid was prepared by Jackie in total contradiction to the revered Duncan who, some months ago, firmly averred that cooking pastry on RBE was impossible. 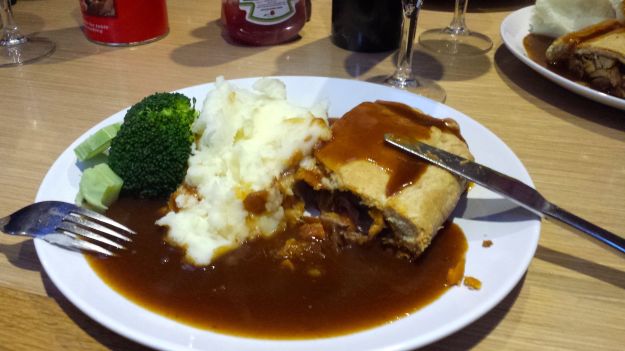 This culinary milestone was followed by a quick visit to the Lamplighters Bar for welcome refreshment.

*Banjo is squaddyspeak for a roll containing egg and/or bacon. When the roll is munched, egg yolk, bacon fat or other detritus can fall onto the front of the consumer’s clothes causing their owner to make a strumming motion in order to remove said detritus.